For my entire life, Christmas has never been a time to brace for, but one to excitedly prepare for. My family always came together to celebrate. I'd travel far and wide as the youngest of four siblings to make it home in time for the holidays. This time, I was traveling in the opposite direction and honestly, it felt foreign and yet I chose this itinerary.

Although destinations don’t determine one's happiness, I kept feeling called back to Jamaica —a place that was extremely special to me. Six years ago, I lived in the country’s capital for a two-year contract with the Embassy...back when I was using my degree and hoping to change the world in my 20's. The career didn’t last, but the country I first served in always had a way of calling me back to it. Christmas seemed like a good time to revisit a comforting place with fond memories, as my anxiety was flaring up in the midst of Christmas consumerism. Also, I had some dread knowing my collective family wasn’t uniting this holiday in order to opt for their own immediate family plans.

Even though all reason and my finances were saying “No”, my therapist, mentor and soul were saying, “Go." I decided to follow my heart over the usual holiday obligation or social traditions.

I’d carry my laptop to the local coffee shop that played reggae music at 1 p.m. sharp every day, stuck in a trance, to research flights. I finally booked a miracle 3-night streak at peak Christmas season at Jake’s Hotel, located in the unvisited town of Treasure Beach I was always curious about. It wasn’t until I flew into Montego Bay and watched sun-starved Americans run through customs to head to their vacations that I realized I wasn’t the only one with this Christmas getaway idea. I was officially inducted as a new member to the club who left the traditional holiday plans to instead dip their toes in the sand and completely forget about who Santa is. I felt at home.

By the time I arrived at Jake’s, I was probably delirious and exhausted, but greeted with my choice of freshly squeezed watermelon, orange or soursop juice. My reservation was in the standard garden view room, “Conch”, which sounded disadvantageous online, but had a splendid view of the ocean.

That night, I fell asleep to the faint beat of music and near-distant voices laughing around my villa, which sat fairly centered on the property close, to the restaurant and bar. The sounds woke me a few times until the noises ended completely in the wee hours of the morning, leaving only the sound of the loud, active sea waves crashing continuously along Jake’s coast. I had absolutely zero complaints.

The following morning, I ordered Jamaican breakfast as typical holiday tunes played with a soca sound. As I ate the ackee and saltfish Jamaican breakfast I craved, the resident yoga teacher, Empress, sat two tables down from me answering questions to a pleasant middle-aged couple about healing rituals at her Rasta Wellness Center. I can’t be entirely sure, but I thought I overheard during their mini-consultation of one ritual involving sitting over a bin after drinking raspberry tea to lead to some feminine spiritual release. It all sounded very Frankie Bergstein, which made me smile. I did end up purchasing the “Queen Goddess Female Herbal Formula” tea with Don Quai, since I battled with cramps all year and had nothing to lose. Not sure if two cups could make the difference but I’m all about learning herbal remedies...When in Rome!

On Christmas morning, I woke up to sounds of the ocean’s forceful waves crashing and the faint sound of clanking dishes in preparation for breakfast. If there’s a better sound to wake up to on Christmas, I don’t know of it.

It’s a slow vibe and definitely an old fashioned concierge system (using the word “system” loosely). I call back memories of working with Jamaicans in my contract days and their “take your time, rush-free” pace was gladly re-introduced into my life. It had me approaching the simple wooden office desk in the lobby for my needs only as they arose individually, rather than more formalized hotel service rattling off lists of needs. There were no phones in the room, so whoever was at the desk would answer guest’s in-person requests on a rotating basis. This is clearly a place for less ambitious travelers who don’t mind the slow, inspiration-guided itinerary of what each day may offer. You can have as limited or as active excursions as you like; from renting a bicycle for a day to riding a 30 -minute boat ride each way to the Pelican bar, which sits in the middle of the ocean; or visiting Lover’s Leap in the next door parish of St. Elizabeth. I won’t say this isn’t a destination for high maintenance guests, but I will say if you are one- you will be cured of that in a good way here. 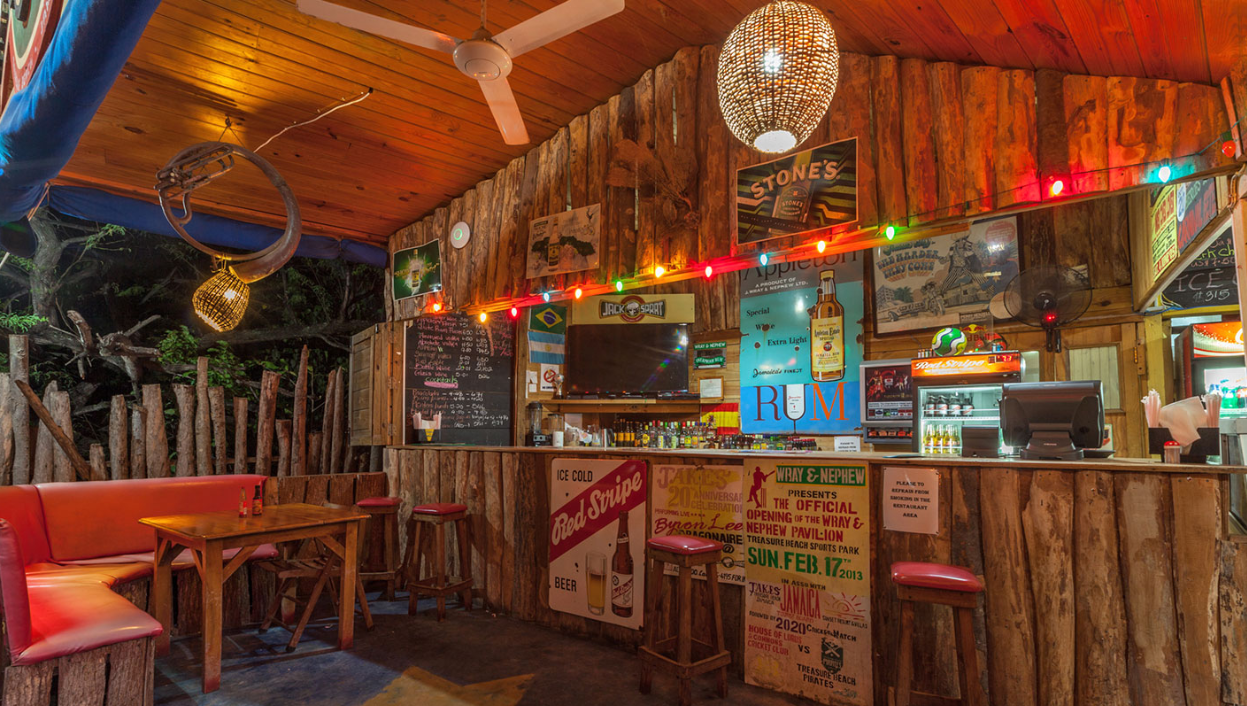 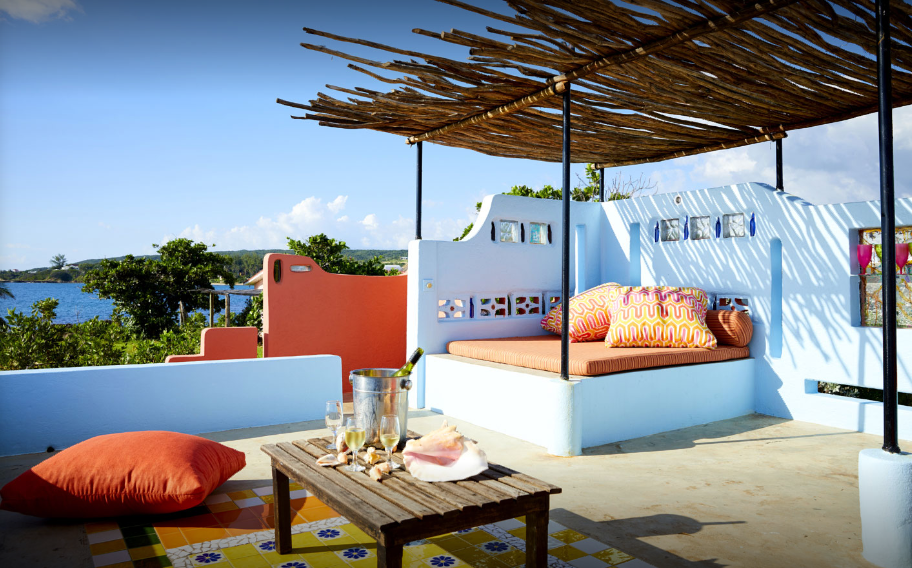 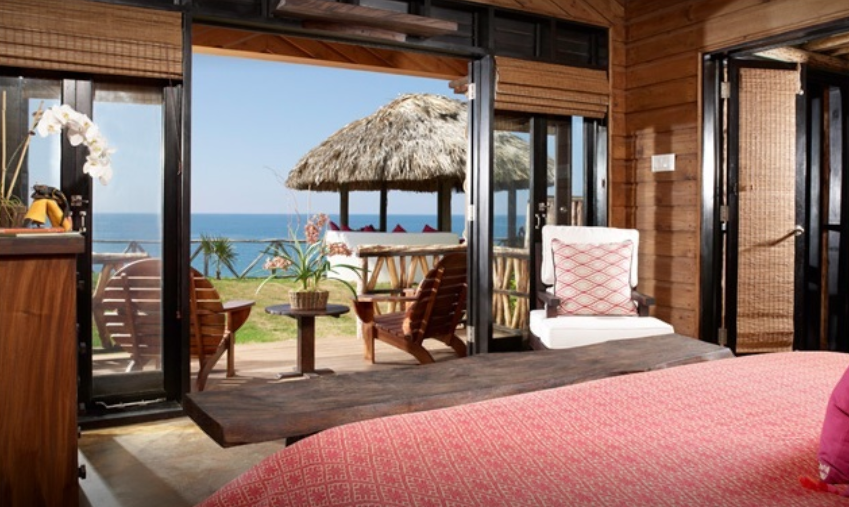 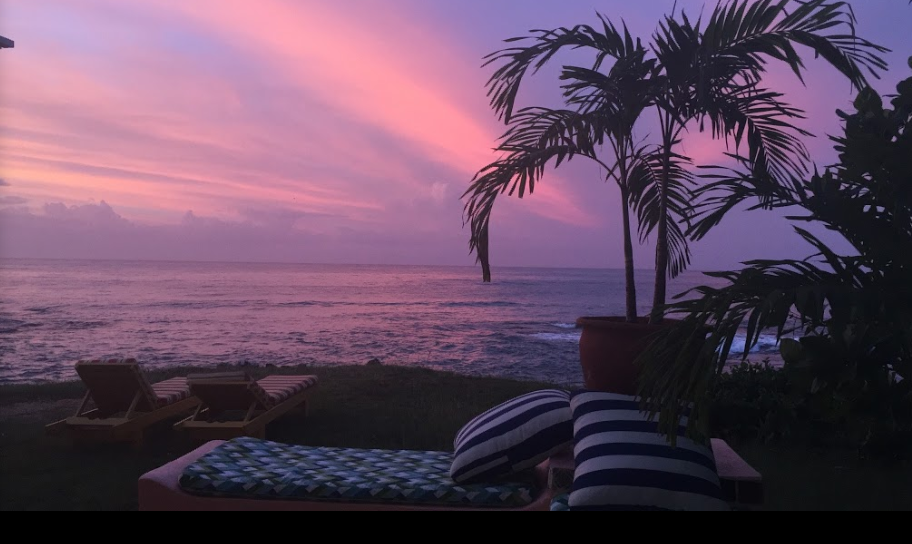 For my excursion, I chose renting a bicycle on day 2. My hands were too busy holding the handlebars to fuss with my smartphone swinging carelessly below in the unzipped cross-body purse I was wearing. In that moment, I somehow was transported back to a childhood memory of riding my bicycle with nothing but the sound of gravel crunching beneath my tires and the open breeze kissing my face from the sea off to my left. I didn’t have a care in the world- I know because I recognized the absence of my usual thoughtful cares and life questions, which were politely excused from the scene as the simplest and purest joy filled my spirit.

Since I didn’t unwind or go out exploring until day 3, there wasn’t a chance to venture much off of the property. Which was alright, because if you do nothing else but dip in the sea once, practice yoga daily or get an aroma massage at Driftwood Spa, you’re ahead of any gift you could unwrap on Christmas day.

Let’s talk about that aroma massage, shall we? I’ve had a fair share amount of massages in my life, beginning in Jamaica as a matter of fact, and this one blew it out of the water- which is funny, because the sound of waves crashing was all I heard as Shelly, (a local massage therapist) gave me the best 50 minute massage of my life. The phrase “perfection on a table” came to mind more than once during our session. I recommend scheduling a full day on the lounge chair after one of these unforgettable massages. Another word of wisdom: stay for a full week or more. No less.

Eating at Jake’s does keep you dependent on the dining area, which is a large open seating patio around the pool area. These gathering areas can be interactive enough that greeting other guests occurs and buds interesting conversations, though all very respectful of each other’s space, since we share it so closely and routinely.

You have your normal bump-ins with fellow travelers in transit or at resorts, but the crop at Jake’s I found to be special. While at Jake’s Bar area, I met a lovely wife named Jennifer who was visiting with her four member family from Brooklyn. "I want a slower paced life," she confessed during our second conversation. And another gracious British woman named Sue visiting from London, who met me with such a genuine smile while passing my breakfast table one morning. She had such a warm spirit and her British accent and deep set eyes made her seem like a character out of a movie. She explained she specifically chose this reservation a year in advance to share with her daughter as a non-resort destination get-away from her country woes. It seemed no matter what the purpose or reason was between us, whether a year in advance or impromptu, with family or solo, we all shared the same life ah-ha’s discovered here.

Jake’s is a magical, mystical place for those who come to find rest. It is a new way to see the vacation experience and to let go of things not serving you in life. I know I’ll be back at Jake’s soon, riding that bicycle and feeling the breeze of the sea on my face – a memory I close my eyes and simulate on days when I need to access childlike wonder. Who knows? Maybe I have a new Christmas tradition here. I can taste the jerk chicken and hear the reggae and soca now...

About the Author: Sarah is a Former Career Foreign Service Specialist who lived and worked in France, Jamaica, and India and is now based in her hometown of Fredericksburg, Virginia. When she's not practicing yoga or daydreaming of travel, you can find her influencing women in self-discovery and success coaching. She's got her eye on Montego Bay next! Learn more at www.sarahcary.com or Instagram @sarahcary.

🌎 Check out FTLO's upcoming group trips for young professionals to beautiful places all around the world.

How You Can Support Your Global Community During COVID-19